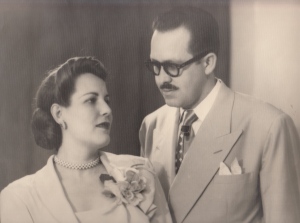 Due to the current guidelines regarding public gatherings because of the COVID-19 virus and safety concerns, please use good judgment in determining the length of your visit or if you should attend.  Six feet of social distancing should be maintained and masks are required for the visitation and service.  There will be no congregating in the parking lot.

Dulce Maria Milligan’s spirit left on Tuesday morning of February 16.  But her last sigh was at 7:55 p.m. on Friday, February 19, 2021 at Miller’s Merry Manor of Warsaw, Indiana at the age of 95. Prayers that grant her the peace in the afterlife are welcomed.

She was born on September 12, 1925 in Ciego de Ávila, Camagüey, Cuba to Tomasa (Hernandez) Genara and Jose Genara.  On March 19, 1950 she was married to Ignacio Fabio Aragon who was also a native of Ceigo de Ávila.  He passed away in 1957.  She eventually re-married to Bill Milligan, and he passed away in 1978.

Dulce grew up in Cuba and she battled against Dictator Fulgencio Batista; then against the self-proclaimed Christian (Socialist/Communist) Fidel Castro.  She spent time in a Communist jail with a total of 100 women, who were starved, beaten and raped.  Priests would bring them sandwiches to eat.  She sent her daughter to the United States of America in December of 1961 on a PP (Pedro Pan) flight.  Under Castro’s Socialist/Communist regime she was not allowed to leave Cuba until the Freedom Flights were enacted by President Lyndon B. Johnson from 1965-1973.  She tried to connect with her daughter, but working in a factory (sometimes 3 shifts) was only able to reconnect when her daughter was 16 years old.  Dulce worked as an assembler for Zenith Rowland in Melrose Park, Illinois and lived throughout the United States moving to Warsaw, Indiana in 2013.  Dulce always had love for her Lord, and wherever she lived she would attend a church.  While living in Arizona she attended a non-denominational church.

Dulce’s remarkable life will forever be lovingly remembered by her daughter:  Jane (Jim) Haney (Leesburg, Indiana); and everyone who was ever fortunate enough to have met this wonderful lady.  She was preceded in death by her parents, both husbands, son, Andre Aragon, two brothers, Alberto del Rosario and Froilan del Rosario.

Dulce’s life will be celebrated with a memorial service at 5:00 p.m. on Tuesday, February 23, 2021 at Redpath-Fruth Funeral Home, 225 Argonne Road, Warsaw, Indiana and officiated by Pastor Jeff Pfeifer.  There will be an hour of calling prior to the service from 4:00 – 5:00 p.m.