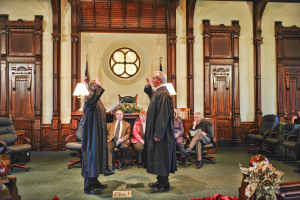 Due to the current guidelines regarding public gatherings because of the COVID-19 virus and safety concerns, please use good judgment in determining the length of your visit or if you should attend.  If six feet of social distancing is not maintained masks are required for the visitation and service.  There will be no congregating in the parking lot.

Kosciusko County Superior Court 1 Judge David Clay Cates died  at his home in Syracuse, Indiana from an apparent heart attack at 9:09 p.m. on Wednesday, December 9, 2020 at the age of 61.

After leaving the practice with Steve Snyder, Cates worked with Rockhill-Pinnick then became a partner with Dick Green at Green and Cates and later Green, Cates and Grossnickle, LLP.  He was the second attorney in the history of the Wawasee Community School Corp., a position he held for 26 years from 1987 to 2013.

He belonged to the Indiana State and Kosciusko County Bar Associations, ABATE, Ducks Unlimited, John Purdue Club, Calvary United Methodist Church and American Legion Post 253 and was a life member of Purdue Alumni Association and Friends of the N.R.A.

David was elected as Kosciusko County Superior Court 1 Judge in 2014, and again in 2020.  He was admitted to practice with the Indiana Supreme Court, Northern and Southern Federal District Courts and U.S. 7th Circuit Court of Appeals.

As a lawyer he was registered mediator, practiced in real estate, juvenile cases, civil litigation, domestic relations, criminal, estate planning and family law. He also was the former Kosciusko County Board of Realtors attorney.

In addition to serving as Wawasee Schools, he served for other corporations, townships, libraries, fire and sewer territories.  David served on the Republican staff of the Indiana House of Representatives from 1981 to 1984. He was past executive secretary of the Indiana Judicial Study Commission, Judicial Nominating Commission, and Judicial Qualifications Commission. He also was named honorary Indiana Secretary of State.

David was an avid fisherman, he also had a love of basketball and coached for 12 years  middle and elementary boys within the Wawasee School System.

His wife, Kimberly, serves on the Kosciusko County Council and always enjoyed boat rides as David fished.  He was past president of the Lakeland Youth Center Board of Directors, and past president of Lakeland Community Services Board (which oversaw the day care and latchkey programs).  He served Teen Parents Succeeding Board, Syracuse-Wawasee, Chamber of Commerce, Webster Lake Musky Club, past president of Syracuse-Wawasee Rotary,  prior K21 Health Foundation Board Member. He was also a past member of the Milford Library Board of Trustees, certified Indiana Hunter Education instructor, and Muskies Inc. International Fishing Organization President.

His famous Grinch Christmas tie will be remembered, which he always wore during the holiday season and became his trademark.  David was a very intelligent man with a sly smile, kind spirit and a servant’s heart.  He will be forever loved and remembered as an amazing son, husband, dad, grandfather, and friend to many.

To send flowers to the family or plant a tree in memory of Judge David Clay Cates, please visit our floral store.